Have You Got The Time? 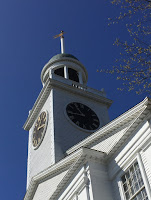 The church I serve happens to have a town-owned clock up in the bell tower.  Apparently, in the late nineteenth century, the town decided that knowing the time of day was important, so took charge of maintaining several strategically-located clocks, three in churches due to the height and visibility of their bell towers (New North Church; the Congregational Church; and the Second Parish Church), and the fourth in what became a schoolhouse and is now a business (the William Fearing Building).  Each clock survives today but none of them is in workable condition.  At the most recent town meeting, a majority of citizens voted to approve twelve Community Preservation Act projects, one of which includes restoring each tower clock. 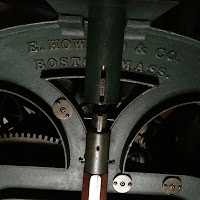 Given that we all walk around with a watch or clock of some kind on our person (via smart phones, dumb phones, or even actual watches) or in our cars, and that just about every device and appliance in our homes has a clock built into it, why bother repairing some old clocks that will still need maintenance after their respective restorations are complete?
The argument that we don’t need working church clocks anymore is compelling.  Hardly anyone looks up these days anyway; we’re too busy looking down at our phones.  Or we’re driving by and can’t see the clock in any case.  Also, they’re just too danged expensive to repair.  This town has found a solution to that concern by using CPA money for the restoration projects, which is exactly what CPA money is intended to fund.  But still the question persists: Why bother?

I can think of two reasons.  First, the town owns the clocks and has come to realize that it has a responsibility to maintain them.  But why, when they have far outlived their relevance and purpose?  That feeds into my second reason: the town values its history and its legacy.  If we turn away from our shared heritage, more and more of what we hold dear will erode away.  Is taking pride in one’s community a sin?  Should we not love the place in which we live?  Knowing that the clocks actually work might give us hope that other, less tangible stuff in town might also work as designed, and that’s a good thing. 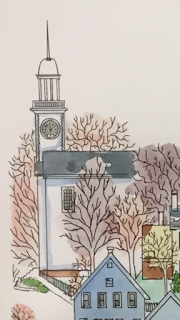