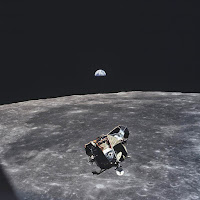 In 1969, Michael Collins served as command module pilot for Apollo 11. While Neil Armstrong and Buzz Aldrin traveled to the moon’s surface in the lunar module, Collins waited on board for 21 and a half hours. As the command module drifted behind the moon, cutting off communication with Earth, he wrote:


“I am alone now, truly alone, and absolutely isolated from any known life. I am it. If a count were taken, the score would be three billion plus two over on the other side of the moon, and one plus God knows what on this side.”

While Armstrong and Aldrin descended to the lunar surface, Collins took a photo through the command module window.  In the frame were the lunar lander in the foreground above the moon, and Earth in the far distance, the big blue marble, all of it.  Excluding Collins himself, that photograph included every person either living or dead – all the nations, gathered before him.  And yet, in that time when he was on the dark side of the moon, cut off and alone, he felt absolutely isolated from any known life.

The righteous are gathered from ‘all the nations’ – anyone can qualify.  All are invited.  Not all choose to join.  But from God’s point of view, there is nowhere you can go where God can’t seek you out.

The Old Ship Church traditionally hosts a Thanksgiving Eve interfaith service.  This year, my first, we counted 19 different participants representing 10 different faith traditions plus several chaplains serving in non-church settings.  It was a good time and a good service, with good music and good singing.  You couldn’t have asked for a more relaxed group of people.  In that stress-free environment, it became easier to reflect on what truly matters, especially as we ease into a new church season.

And in our reflection, we might more easily hear the words of Jesus in all their power: “When the Son of Man comes in his glory, and all the angels with him, [...] then the king will say to those at his right hand, ‘Come, you that are blessed by my Father, inherit the kingdom prepared for you from the foundation of the world’” (Matthew 25:31, 34).