In the same way that everyone talks about the weather yet no one does anything about it, many people admit that they want to “get into the Bible” but tend to get stuck almost immediately.  Whether your strategy is to read the entire Bible from Genesis to Revelation in one year or simply to open the Bible at random every now and then, it can be daunting to establish a relationship with Scripture from scratch.  This new series by the Rev. Anne Robertson goes a long way to removing barriers to entry, so to speak.  Designed for a wide range of people, from casual or informal readers studying on their own, to intentional students working in small groups, this three-volume series includes both student texts and corresponding leader texts.  The Exploring the Bible series includes a program that provides a “birds-eye view” of Scripture over six 90-minute sessions complete with homework and student presentations.  One can even earn a certificate of Biblical Literacy, with the courses counting as continuing education units.
The Massachusetts Bible Society exists primarily to promote biblical literacy.  Toward that end, Rev. Robertson claims three “foundational biases” in the presentation of information in the series: the idea that the Bible can be read and interpreted by any interested individuals; that scholarship plays a constructive role in conversation with diverse faith traditions and interpretations; and that a “smidge of skepticism” is a necessary tool for study, in concert with the checks and balances of our reasoning ability, the voices of others, and the “anchor” of our various faith traditions, to build a solid foundation of Bible knowledge.  And that is the point of the series: to open up the Bible as something to be read – whether you want to do that critically or simply for enjoyment.
With this Bible study series, Robertson intends two things: to make us all better Bible readers who can turn to Scripture confident that we will find it a deeply rewarding source of wisdom and insight, and to create a new generation of Bible study leaders in a community setting with courses designed to show leaders how to facilitate group discussions.
The first volume, “What Is the Bible?” gives a broad overview of the Bible and its organization, includes a guide to choosing the Bible that’s right for you, a discussion of how the books of the Bible were chosen, and the role of archaeology in forming our understanding of the texts.  The second volume, “Introducing the Old Testament,” looks at the best-known stories, characters, and themes of the Old Testament, as well as insights into Hebrew literature and the people of the ancient Near East.  The third volume, “Introducing the New Testament,” offers a similar treatment to the Gospels, letters, and other texts important to the early church.
There can be little doubt that some of the content in these volumes will cause discomfort in some readers, especially the sections in Volume II that deal with, for example, the appearance of Cain’s wife in Genesis 4, or the mention of the Nephilim, or, even more likely, when things probably happened versus when they were written down.  Robertson wisely and skillfully confronts the mindset that truth can only equal facts, and puts it aside as quickly as it appears.
The student texts also use timelines as a very helpful tool for gaining context and extra-biblical information.  For example, the Hebrew calendar dates the Great Flood to 2104 BCE, but eight hundred years before that, glass and papyrus were invented and first used (Vol. II, 24).  In this fashion, the author reveals fully-formed societies that were on the move.  The world was a busy place beyond what was happening in the Bible.  Abraham and Sarah didn’t live in a vacuum; their story was shaped as much by the world around them as it was by their faith in God.
In addition to timelines, Robertson makes good use of sidebars, graphs, and photos.  Volume two includes Abraham’s genealogy that shows who birthed whom and the origins of the Twelve Tribes of Israel.  Volume three features artwork both ancient and modern, depicting scenes and personages from the first century.  The appendices in the third volume are valuable on their own, including brief biographies of Jesus’ disciples, discussions on the apocryphal books of the New Testament and on who killed Jesus, and a glossary, among other things.
Most likely, the people who come to this series will be Christians, and for them, volumes two and three will be of great interest, with volume three getting the most attention.  They won’t be disappointed.  The student texts are generally easy reading but at the same time, they convey a lot of information in compact units.  Robertson’s writing flows freely yet her knowledge is scholarly and deep.  To our benefit, she takes the time to identify who was who in the first century, with brief sketches of the Pharisees, Sadducees, Essenes, Levites, and so on.  If you want to know the difference between the Son of Man, the Son of David, and the Son of God, here is a good place to start.
The leader texts are geared toward facilitating group study and they include everything a leader would need to have handy without having to refer to the student text.
A second edition is now available at Amazon.com.  These updated editions fix technical problems with some web site links, standardizes the introductory and supplemental material and fixes errors reported by readers of the first edition.  For more information about the series as a whole and the options it provides for beginning Bible study, check the MassBible.org and exploringthebible.org web sites.
Taken as a whole, this is an ambitious project and is so well-conceived and presented, one hopes for its immediate success.  We root for it to become the new standard for both small-group and individual Bible study.
Posted by gander8 at 2:56 PM 1 comment:

A trip hammer, also known as a helve hammer, is a massive powered hammer used in agriculture, mining, and fabricating tools from iron and other metals. Trip hammers were usually raised by a cam and then released to fall under the force of gravity. [Source: wikipedia]

Trip hammers uniquely solved a particular problem - how to pound things flat, and they did that one thing well.  Over time, trip hammers became obsolete, and left behind a legacy of ruined mills, ponds, and a changed environment.

Around here, Triphammer Road leads to Triphammer Pond where, in the nineteenth century, clever people used water-powered trip hammers to shape iron for the local ship and fishing industries. 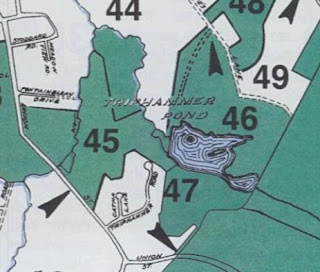 The mills on Triphammer Pond are no longer in use and Triphammer Road is now a quiet residential side street.  Times change.  We move on.

What can we take away from the idea of violent, loud, and dangerous machinery as the inspiration for reflection and talking about God in our lives?  Maybe it's the Biblical idea that "iron sharpens iron" (Proverbs 27:17).  Or that we are all shaped in some way by powerful forces we can barely control.  Or maybe it's just a cool name.
Posted by gander8 at 10:21 PM 6 comments: