One If By Land

Two hundred and forty-five years ago, the American Revolution began on this day, which happened to be a Wednesday that year.  It all started at sunrise on Lexington's town green: 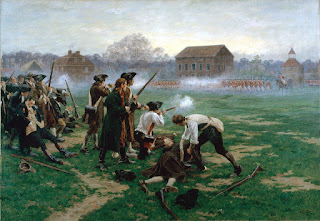 
The rest, as they say, is history.  But history is quirky.  As the story of how we got here, history is often mis-remembered, mis-quoted, rewritten to suit the current audience, or simply forgotten until someone stumbles over it in the dark.
It was quite by chance that this story appeared in my e-mail this morning, from the New England Historical Society: Six Fun Facts About Paul Revere’s Ride.
We have a friend who is a member of the Paul Revere Memorial Association, and I thought of him as I read the article.  He's the type of person who would have known all of this and THEN joined the association.
The first 'fun fact' for me was to learn that Longfellow's poem, Paul Revere's Ride, was really about fighting slavery.  Follow the link to find out how, and you will learn about Longfellow too.  In my generation, this poem was simply something one knew; I can't tell you when I learned it but I'll have to read it again now.
Another item, #6, reminds us of the relative impact that Revere's ride had on him, his family, and anyone not living in Boston at the time: his obituary in 1818 doesn't mention the ride at all.  But in hindsight, it became a big deal for us.
Notice, too, that the painting above resides in the National Army Museum in London.  History may be written by the winners, but everyone can learn from it. 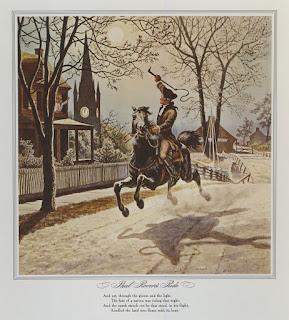