Uyghur Genocide: What Have You Heard?

In a recent column published by the Jewish News Syndicate (Why aren’t Jews up in arms about Uyghur genocide?), Jonathan Tobin writes:

“The Uyghurs are a predominantly Muslim ethnic group who live in the Xinjiang region of Western China. Since 2014, China’s ruling Communist Party has been carrying out a campaign of ethnic cleansing and genocide against them. Acting under the authority of President Xi Jinping, crimes against humanity have been taking place there on an enormous scale, including mass imprisonment, systematic torture, rape, forced abortions and sterilizations. At least 1 million Uyghurs have been sent to the laogai—the Chinese gulag of prison camps. It is the largest systematic assault and imprisonment of an ethnic or religious minority since the Holocaust.” 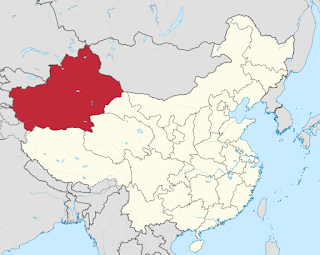 Tobin goes on to speak about the two main reasons why the mainstream media seems relatively quiet about this latest and ongoing genocide: politics and economics.  In an article that is especially hard on Jews, Tobin could just as easily be speaking about America and Americans.

He points out that, ‘on its last day in office, the Trump administration formally recognized that what was going on in Xinjiang was genocide, an important step towards treating this catastrophe with the seriousness it deserves.’  A commendable but belated recognition.

The incoming Biden administration has ‘slapped sanctions on Chinese officials directly implicated in the genocide.’

Business Insider reports: ‘The sanctions, which target Wang Junzheng, the secretary of the Party Committee of the Xinjiang Production and Construction Corps, and Chen Mingguo, the director of the Xinjiang Public Security Bureau, were rolled out in coordination with Canada and European allies.’

'"Amid growing international condemnation, the PRC continues to commit genocide and crimes against humanity in Xinjiang," Secretary of State Antony Blinken said in a statement.'

The Chinese then turned human rights violations back on the United States:

‘Yang Jiechi, China's top diplomat, responded by accusing the US of being condescending. In comments that lasted roughly 15 minutes, Yang said the US government was in no position to lecture other countries on human-rights abuses, alluding to racism in the US as he mentioned the Black Lives Matter movement.’

Stay tuned as this debate will probably continue, with no relief for the Uyghurs.

Additionally, Tobin writes, standing up to China, the world’s second-largest economy, is not ‘cost free:’

‘[The] United States must weigh how its economy has become inextricably linked to that of China’s growing power in determining how to respond to these atrocities.’

The amount of trade in iPhones alone is enormous.  If that were to disappear, you would hear about it.  Also, all politics is local: Tobin points out that activist energy has been diverted to other, ‘more fashionable’ causes, such as the Black Lives Matter movement.  Surely, one would think that activists could muster enough outrage for all human rights causes.

Instead, Tobin writes, the world ‘is too busy or too intimidated by China to do more than raise a token protest about what’s happening to the Uyghurs.’

Fair enough.  We could probably be excused on grounds of pandemic fatigue too.

But Natan Sharansky wrote that there can be no peace with dictators, saying, ‘A society is free if people have a right to express their views without fear of arrest, imprisonment, or physical harm.’ 1    The Uyghurs, then, indeed, all of China, are not free.

So, are we as a society just looking the other way on this issue?

In her book, How to Fight Anti-Semitism, Bari Weiss offers a list of things we can do to combat anti-Semitism, and they can be used here also.  Here are just two:

Call it out.  Do not be caught in a conspiracy of silence. 2

Never, ever forget to love your neighbor.3   Even if that neighbor is thousands of miles away.  Weiss writes, ‘When someone is attacked because of her identity and not her ideas, see that as an attack on you.’  If Christians heed the call to love our neighbor, then that must also include the neighbors we can’t see or hear.

So, where do we go from here?  If this matters to you, get active.  Call it out.  Ask your elected representatives what they are doing to help.  Keep the pressure up.  Don’t be silent.  Love your neighbor.  And never, ever forget.

The Uyghur Genocide: An Examination of China’s Breaches of the 1948 Genocide Convention, 8 March 2021.

The US says China is committing genocide against the Uyghurs. Here's some of the most chilling evidence, 2 April 2021.

US accuses China of 'genocide' of Uyghurs and minority groups in Xinjiang, 20 January 2021.

China's Uighur Genocide: Here's Everything You Need To Know About the CCP's Human Rights Abuses, July 22, 2020

1 Sharansky, Natan Anatoly. The Case for Democracy: the Power of Freedom to Overcome Tyranny and Terror. Public Affairs, 2004, 40.